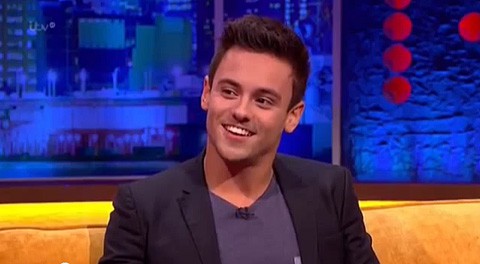 British diver Tom Daley appeared on The Jonathan Ross Show on Saturday night to talk about a number of things, including his diving reality show Splash, the Olympics in 2016, and his coming out. The identity of Daley's boyfriend, thought to be Oscar-winner Dustin Lance Black, was not revealed on the program.

"It really was love at first sight," said Daley.

Of making the video he said, "To be honest it was a terrifying decision to make…I just wanted to say something in my own words from my heart."

Daley went on to thank everyone for being supportive and added that he was surprised he fell for a guy. "It happened so quickly. I thought I'd really liked someone before but I'd never felt the feeling of love and it happened and I was completely overwhelmed by it to the point where I can't get him out of my head all the time…I thought that I'd felt feelings like it before but this surpasses it."