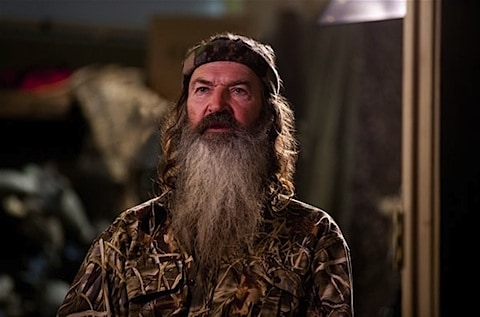 Phil Robertson, the star of A&E's massive reality hit Duck Dynasty, has made some outrageous remarks in a new interview in GQ.

What does repentance entail? Well, in Robertson’s worldview, America was a country founded upon Christian values (Thou shalt not kill, etc.), and he believes that the gradual removal of Christian symbolism from public spaces has diluted those founding principles. (He and Si take turns going on about why the Ten Commandments ought to be displayed outside courthouses.) He sees the popularity of Duck Dynasty as a small corrective to all that we have lost.

What, in your mind, is sinful?

During Phil’s darkest days, in the early 1970s, he had to flee the state of Arkansas after he badly beat up a bar owner and the guy’s wife. Kay Robertson persuaded the bar owner not to press charges in exchange for most of the Robertsons’ life savings. (“A hefty price,” he notes in his memoir.) I ask Phil if he ever repented for that, as he wants America to repent—if he ever tracked down the bar owner and his wife to apologize for the assault. He shakes his head.

“I didn’t dredge anything back up. I just put it behind me.”

As far as Phil is concerned, he was literally born again. Old Phil—the guy with the booze and the pills—died a long time ago, and New Phil sees no need to apologize for him: “We never, ever judge someone on who’s going to heaven, hell. That’s the Almighty’s job. We just love ’em, give ’em the good news about Jesus—whether they’re homosexuals, drunks, terrorists. We let God sort ’em out later, you see what I’m saying?”

“It seems like, to me, a vagina—as a man—would be more desirable than a man’s anus. That’s just me. I’m just thinking: There’s more there! She’s got more to offer. I mean, come on, dudes! You know what I’m saying? But hey, sin: It’s not logical, my man. It’s just not logical.”

GLAAD has condemned the remarks and says it has reached out to A&E:

"Phil and his family claim to be Christian, but Phil's lies about an entire community fly in the face of what true Christians believe," said GLAAD spokesperson Wilson Cruz. "He clearly knows nothing about gay people or the majority of Louisianans – and Americans – who support legal recognition for loving and committed gay and lesbian couples. Phil's decision to push vile and extreme stereotypes is a stain on A&E and his sponsors who now need to reexamine their ties to someone with such public disdain for LGBT people and families."

Duck Dynasty is now a $400 million brand it has become so successful.

Previous Post: « Lady Gaga and Christina Aguilera Perform ‘Do What U Want’ on ‘The Voice’ Finale: VIDEO
Next Post: Rachel Maddow: Obama’s Gay Delegation to the Olympics Gives Appearance of a ‘Snub’: VIDEO »