Back in June we posted about Alabama’s all-male cheerleading team The Prancing Elites.

The group is back in the headlines after a performance in an Alabama Christmas parade over the weekend, FOX10 reports:

Claudia Davis was at the parade with her daughter.  “I was outraged and appalled. I never expect anything like this at the Semmes Christmas parade,” Davis said.Like many others in the crowd Davis felt the dance group was inappropriate.“If they were gonna put this kind of activity in the parade, they should have notified the people of Semmes so that we had a choice whether we wanted out children to attend and see something like that,” Davis said.

The Prancing Elites say they were shocked at some of the remarks they heard during the parade:

“Some of them were saying stuff like Oh my God, what’s that?”

Watch FOX10’s report, AFTER THE JUMP… 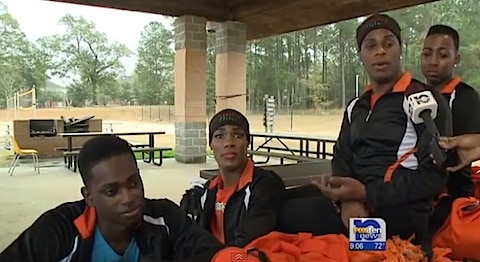 Previous Post: « Watch The Finale Of ‘Whatever This Is.’ From The Creator Of ‘The Outs’: VIDEO
Next Post: Federal Judge Issues Narrow Ruling Against Ohio’s Gay Marriage Ban »