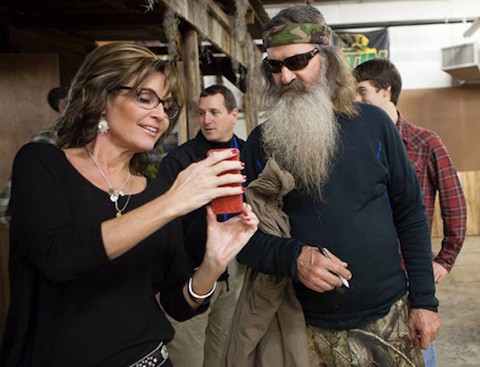 In an interview with Fox News, Sarah Palin predictably offered support for Duck Dynasty's Phil Robertson, and to bolster her stance she played the "gay friend" card. Referencing her nameless and totally real gay friend, Palin said in a long, rambling run-on sentence:

"In fact, a friend of mine who happens to be gay, she emailed me to say she is outraged at A&E for the hypocrisy here, for the things that they air on their program that she finds offensive, yet A&E doesn't fire a star or somebody involved in their programming based on what they said but they would  when it comes to Phil on Duck Dynasty and this friend, she said that she would boycott A&E and that network, and uh, um, she's not the only one."

One wonders if it's the same gay friend of 30 years she last referenced in an interview during the run up to the elections in 2008. You can watch her current interview AFTER THE JUMP…

In related news, Ms. Palin admitted to Fox News host Greta Van Susteren yesterday that she hasn't actually even read the GQ article at the center of the controversy, stating “I haven’t read the article. I don’t know exactly how he said it.”

The quote referenced above is approximately at the 3:17 mark.