As you may know, yesterday Nigeria's President Jonathan Goodluck signed a law mandating 14 years prison time for anyone entered into a same-sex marriage or civil union and 10 years in prison for anyone who participates or operates a gay club or organization, or shows any indication that they are in a same-sex relationship. 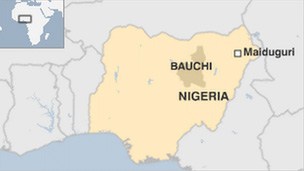 A human rights organization today reports that in Nigeria's northern Bauchi state arrests are already underway, according to the AP:

Dorothy Aken’Ova is executive director of Nigeria’s International Center for Reproductive Health and Sexual Rights. She said Tuesday the new law, already being dubbed the “Jail the Gays” law, will endanger and even criminalize programs fighting HIV-AIDS in the gay community.

She said police in Bauchi state have a list of 168 purportedly gay men, of whom 38 have been arrested recently.

Jonathan’s spokesman confirmed Monday he signed the act providing penalties of up to 14 years in jail for same-sex marriage and up to 10 years’ imprisonment for membership or encouragement of gay organizations.

A State Department spokesperson was grilled yesterday about the new law. See her interview HERE.