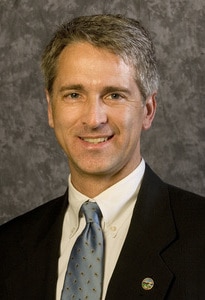 The legislator pushing the bill says it's designed to protect religious freedom, and Republican Gov. Sam Brownback is receptive to the idea, though he hasn't yet studied the proposal enough to offer a formal endorsement.

However, critics say the measure promotes discrimination against gays and lesbians, and is so broadly written that it could apply to any couple, gay or straight, with a less-than-traditional union.

The Kansas House's Federal and State Affairs Committee scheduled a hearing for Tuesday morning on the measure. It's not clear how quickly the committee might act on it.

Said Brownback: "I think it's something we that need to protect, our people's religious liberties and religious rights."

According to the ACLU the bill's interpretation could be broad:

Companies offering benefits to legally married gay couples or domestic partners could have their policies blocked by individual employees. She said businesses could make decisions about benefits for straight couples based on whether an owner doesn't think a marriage is traditional enough.

Previous Post: « Jason Collins to Sit in Michelle Obama’s Box for ‘State of the Union’ Address
Next Post: Sochi Mayor: We Do Not Have Gays in Sochi »