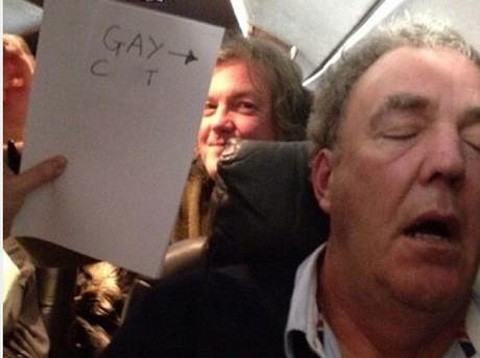 Jeremy Clarkson, the host of the UK's car show Top Gear, posted a photo on Twitter his friends had taken of him after he had fallen asleep on a plane.

A piece of paper with the words "gay c–t" scrawled on it was held near Clarkson's head.

The famously acerbic TV personality then shared the image on his Twitter account alongside the caption: "Sadly, I fell asleep on the plane."

After attracting a barrage of protesting tweets, the 53-year-old removed the message, posting instead: "I have deleted my last tweet and would like to apologise profusely to anyone who I upset while I was asleep."

However, it is unclear whether Clarkson posted the picture himself, or whether that too was a practical joke played by his ‘hilarious’ Top Gear co-stars.