NK: How do you find writing an original character for yourself? Is writing comedy that you’re going to perform easier or somehow more tricky?

CB: It’s easier because I know my comedy rhythms and what I can and can’t do. Though it still ends up being a challenge. This part, even though I wrote it for myself, was a little bit theoretical. I’ve really never played a male character before on stage, except once in 1994 (in You Should Be So Lucky). 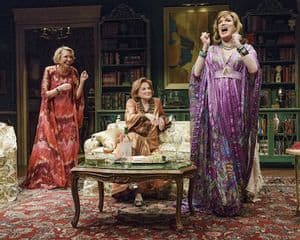 When we started rehearsing this play, I didn’t really know what my male voice was, I’m just not used to it. I was trying to separate the characters, but what I’ve been discovering more and more is that Jimmy, the female impersonator, isn’t that different from the voice that he’s impersonating. He’s completely androgynous, which is fun because you don’t quite know when he’s one or the other.

NK: Much of your work (including The Tribute Artist) pays homage to classic movie stars from the 1930’s onward—Bette Davis, Rosalind Russell, Katharine Hepburn—why do you think these women and their performances resonate so much with gay men? How did they first resonate with you?

CB: Well, these women were first of all very talented, and bigger than life. There are always exceptions to the rule, but generally speaking the women in the pantheon of gay favorites tend to be strong, embattled women who are struggling. Even someone like Judy Garland, who you think of as very vulnerable, was always making another comeback. Two thirds of the songs Judy Garland sang were about carrying on despite all odds.

Bette Davis too in a way, and Joan Crawford, Rosalind Russell, Susan Hayward—I think a lot of gay men, particularly who’ve maybe felt a bit oppressed, would identify with a female character who’s indomitable. Someone could always say, ‘Well what about Marilyn Monroe?’ But there are exceptions to every rule, I didn’t write the book!

I first became exposed to all these women when I was a very young child watching old movies on TV. Right away, I found them fascinating, fun to watch and moving. My mother died when I was 7 and I was raised by my aunt, an elegant, strong lady who had to fight to protect us. I could easily identify her with the women I saw onscreen. 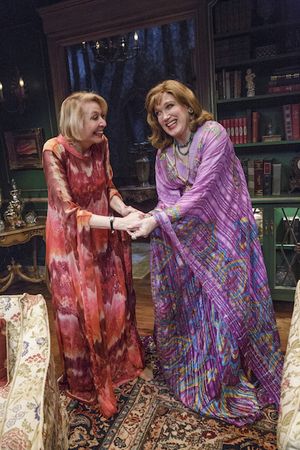 Also, older generations didn’t have any gay role models in the media. You have to identify with somebody, so you take what you can get. If you’re a slightly androgynous gay personality, you’re not going to identify with John Wayne or Humphrey Bogart, but Bette Davis was somebody you could more likely identify with.

People keep telling me that young gay men don’t know who the hell any of these ladies are and couldn't care less. And I guess they have their own favorites. Lady Gaga is already passé, isn’t she? But whoever it is, there’s some flamboyant lady who young gay kids are into I’m sure.

NK: You have very specific ideas about drag and female impersonation that colors both your writing and your onstage performances. Can you tell me a bit about your personal approach to drag?

CB: For each person who does drag professionally, it comes out of a personal place. Drag performers who go for a sort of grotesque look with wild makeup and huge hair—they’re coming from a certain place of satire, but it’s also very personal.

It’s also based on your physicality. If you’re a large person with big features, it’s better if you exaggerate them more. My trip tends to be very real. I’m only 5’7 and slim and have kind of delicate features, so it’s rather easy for me to look like a realistic lady.

My whole career as a drag artist has been an attempt to play these female characters that have been based on or influenced by movie icons—like Rosalind Russell, Susan Hayward, or Bette Davis—but at the same time, play them with a certain reality and emotional truth. 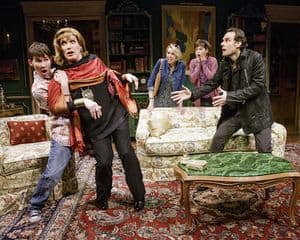 More and more over the years, that’s really been the path I’ve been on. When I first started playing female characters in the late 70s, everything was so exaggerated—a lot of mugging and hamming it up. Over the past 35 years, there’s been a gradual refining and editing process, so I actually don’t do that much. I’m able to channel the feminine me, because I’m a rather androgynous personality.

NK: Do you have any specific hopes for the future of drag performance, how it might reach wider audiences and the impact that might have?

CB: I think it’s a little bit of a niche market, but I must say RuPaul’s Drag Race certainly has given more people a certain sense of drag. By nature of being a competition show, it has to limit its scope a bit to have parameters for judging contestants. Even within that, the different people who’ve come out of that show evidently make a lot of money touring around afterward—I think it’s great.

Drag is always going to be the sort of low man on the totem pole as far as gay life goes, because most gay people so want to assimilate and drag is a little out there. Everything in the world to me as far as sexuality just seems to be loosening up and becoming more assimilated—gay marriage and gay imagery are becoming so prevalent. I think it’s all very positive.

The Tribute Artist is running at Primary Stages through March 16th.