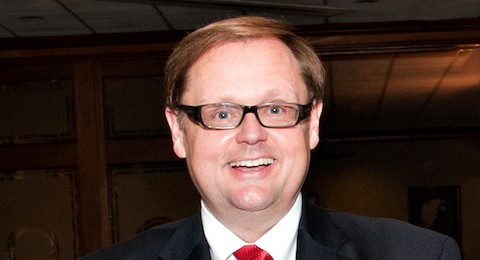 Todd Starnes is very, very sad. After seeing gay weddings in the Rose Bowl Parade, the various outpourings of support for gay Olympians and condemnations of Russia's abominable laws, having a meltdown over the Grammy weddings, and now with Michael Sam daring to come out as an openly gay football player, sports have been ruined for Starnes forever.

I should’ve learned my lesson after the Rose Bowl Parade and the Macy’s Thanksgiving Day Parade.

It’s all about advancing a cultural agenda — no matter the cost.

We are no longer allowed to have fun and enjoy sports or entertainment programs. How sad.

"Advancing a cultural agenda"…said without a trace of irony from the man who lied that Colorado high schoolers have been banned from celebrating America, falsely claimed that a VA hospital in Dallas forbade Christmas cards, and engaged in vile fear-mongering tactics by asserting that Obama is going to turn the U.S. military against Christians.

Hemant Mehta at Patheos sums up Starnes' complaint rather nicely: