The Human Rights Campaign yesterday called on Secretary of State John Kerry to recall U.S. ambassadors to Uganda and Nigeria in reaction to legislation and oppression of LGBT citizens in those nations. 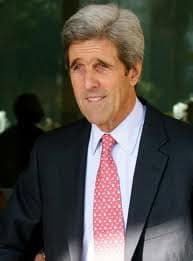 "The Ugandan and Nigerian governments' decisions to treat their LGBT citizens like criminals cannot be accepted as business as usual by the U.S. government. We urge Secretary Kerry to recall both Ambassadors for consultations in Washington to make clear the seriousness of the situation in both countries," said HRC President Chad Griffin.

Last week, a spokesperson for the Ugandan president announced that President Yoweri Museveni is set to sign an archaic anti-LGBT bill into law that was passed by the Uganda parliament last December. The bill, which once included the death penalty, calls for gay Ugandans or anyone "promoting" homosexuality to be jailed — potentially for life. The passage of the AHB and subsequent approval by Museveni is part of a broader clawback in fundamental freedoms in Uganda over the last several years, particularly regarding freedom of expression, assembly and association. Human rights violations are on the rise and the AHB represents an especially troubling escalation of this trend.

An equally horrific law was signed by Nigerian President Goodluck Jonathan in January. The law criminalizes same-sex marriage, punishes homosexuality with jail terms of up to 14 years, and threatens any person who supports or is a member of an LGBT organization with 10 years' imprisonment. Since the law was enacted, Nigerian activists and human rights groups have reported dozens of LGBT individuals have been arrested, many of who work to combat HIV/AIDS in the country. It has also been reported LGBT Nigerians are facing blackmail by the police and mob violence.

Over the weekend, U.S. National Security Advisor Susan Rice reported on Twitter that dialogue with President Museveni urging him to refrain from enacting the Anti-Homosexuality Bill (AHB) had proven unproductive. President Barrack Obama also issued a statement condemning the AHB.

International human rights organizations agree in an interview with the AP that the "quiet diplomacy" from the U.S. is not working:

"We need a better strategy," said Julie Dorf, senior adviser at the Council for Global Equality. "We do believe that our government here in the U.S. needs to ramp up the potential consequences that countries might face for these regressive anti-human rights measures. I have no doubt that President Museveni watched very carefully what happened after President Jonathan signed the Nigeria bill. And the truth is, there wasn't much of a reaction."

Human Rights Watch and the Robert F. Kennedy Center are both calling on the U.S. ambassador to Uganda to be recalled for consultation.

Canada has threatened to cut ties with Uganda over the anti-gay bill, according to an interview with the Canadian ambassador to Uganda published earlier this week.