Rep. Mike Rogers (R-AL) is being called out for making homophobic remarks in front of hundreds of realtors at a meeting of The Alabama Association of Realtors  in Montgomery, AL.com reports: 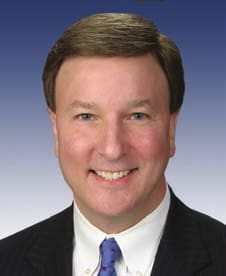 "At the Board of Directors meeting this morning one of our speakers made some remarks that were inappropriate and offensive to some of our members," the statement said. "Those remarks are not reflective of AAR or our policies.  Moving forward we will endeavor to prevent such inappropriate remarks at our events or meetings."

In the open letter to Rogers, Equality Alabama Chairman Ben Cooper wrote, "when you marginalize our community, we will not be silent."

“You allegedly joked about how nice it was to be called ‘Honey’ and ‘Sweetie’ by a woman at an Alabama restaurant rather than a D.C. men’s room,” Cooper wrote. “And you went on to mock our nation’s capitol as a ‘cross between Detroit and San Francisco’ — an obvious reference to Detroit’s racial makeup and San Francisco’s vibrant gay culture. Comments like these are racist, homophobic, and hurtful, and they will not be tolerated.”

Rogers has been invited by the LGBT rights group to a Feb. 16 Vigil for Victims of Hate and Violence at the State Capitol. We'll see if he attends.