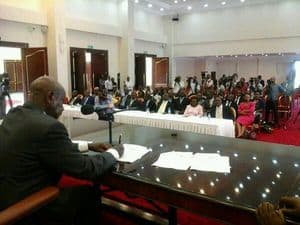 Instead of standing on the side of freedom, justice, and equal rights for its people, today, regrettably, Ugandan President Museveni took Uganda a step backward by signing into law legislation criminalizing homosexuality. As President Obama has said, this law is more than an affront and a danger to the gay community in Uganda, it reflects poorly on the country's commitment to protecting the human rights of its people and will undermine public health, including efforts to fight HIV/AIDS. We will continue to urge the Ugandan government to repeal this abhorrent law and to advocate for the protection of the universal human rights of LGBT persons in Uganda and around the world.