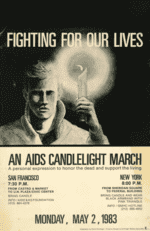 For the first time since 1983, AIDS is no longer listed among the top ten causes of death in NYC, according to Health Commissioner Mary Bassett.

In 2011, it was the number nine killer, with 766 deaths. That number dropped to 609 for 2012, according to statistics released last month…City officials say better treatment is allowing New Yorkers with AIDS to live longer.

“It’s a tribute to the efforts that have been made…in tackling this epidemic. We are seeing some success,” Bassett said at a City Council budget hearing.

Bassett said the number of new HIV infections in the city is steady or declining each year unlike other areas of country which are seeing a rise in new infections between men who have sex with men.