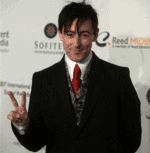 He, along with Geller, recently acquired the spec Dunes of Overveen, the true life story of Willem Arondeus and the bloody underground uprising of artists in Amsterdam during WWII against occupying Nazi forces. It was written by Rich Burns and David Mixner, a civil rights activist and best-selling author.

We'll look forward to seeing this come to life!

Previous Post: « Will Russia Invade Ukraine or is it Already Happening?
Next Post: ‘Caught’, a Short Film About a Gay Teen and a Secret Lust in 1948: VIDEO »