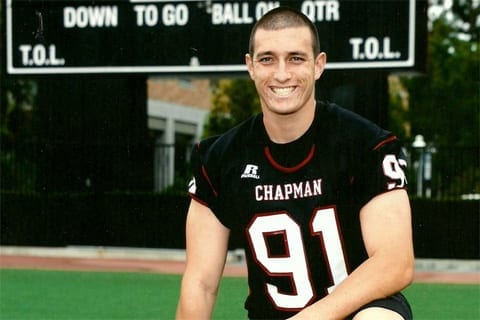 Outsports reports on another moving coming out in the football world.

Mitch Eby is a junior defensive end on the Chapman University Football team, who reached out to Willamette University kicker Commer Mertens, who came out of the closet (the first active college football player to do so) in January as he was struggling with the decision to tell his team:

For Eby, who had only ever come out to one other person, talking with Mertens was a revelation. The two kibitzed over football, Eby shared his fears about coming out and Mertens talked about his experience with telling his team. Mertens had chosen to have his Willamette team read a letter from him at a team meeting – without himself present.

Eby knew he wanted to tell his team himself, but there was some work to be done before that was possible.

After telling his head coach and his roommates, who were also teammates, Eby gave a speech to his team, which read, in part:

I am ready to share with you all that I am gay.

"Being gay may be something that defines me, but it does not limit me. It is such a small part of who I am. I am the same person you all know, no different than before. I'm still the kid that is obsessed with pretty much anything having to do with sports, I'm still the kid that some of you love to call stupid nicknames like ‘mom' and ‘hot dog,' and I'm still someone who will continue to go out there every day and push myself and push my teammates to be the best football team around. I am your teammate, I am your classmate and I am your brother. And I know that my brothers will continue to stand by my side, no matter what."

When he had finished speaking, the team erupted in applause. Eby smiled, taken aback by the overwhelming response. As the clapping ceased, Eby broke the silence with the most profound words he would share all night: "So how about some pizza?"

Athlete Ally Founder Hudson Taylor responded to Eby's coming out in a statement provided to Towleroad:

“Mitch is demonstrating great courage and leadership by publicly coming out as gay while still actively playing college football. While the decision to take this step is a deeply personal one, it impacts countless other young closeted athletes who will wrestle with how to compete and live their lives authentically. Today represents another important step in making sports a welcoming environment for all."

Previous Post: « Mozilla Reiterates Support for Marriage Equality as Three Board Members Step Down
Next Post: Scott Lively Denies Anti-Gay Role in Uganda, Says Obama Might ‘Be a Homosexual’: VIDEO »