A new report from the National Institute of Health  suggests that 'gene editing' — removing cells from HIV patients, modifying them and replacing the cells — offers new hope in controlling the virus without drugs. 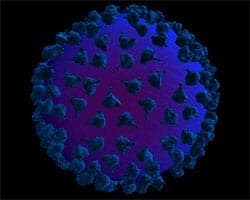 The NIH reports, via press release:

Scientists today report initial results from humans on the safety and tolerability of a novel strategy to curb HIV disease by removing key cells from HIV-infected individuals, genetically modifying the cells to resist HIV infection and returning them to those people. The basic and pre-clinical research on this strategy, which eventually might help people control the virus without drugs, was funded by the National Institute of Allergy and Infectious Diseases (NIAID), part of the National Institutes of Health. The Phase I clinical trial was funded by Sangamo BioSciences and was led by NIAID grantee Carl H. June, M.D., with co-investigators Bruce L. Levine, Ph.D., and Pablo Tebas, M.D., all of the Perelman School of Medicine at the University of Pennsylvania, Philadelphia.

The trial built on the observation that people who naturally have a genetic modification in a protein called CCR5 are resistant to HIV infection, and when infected with HIV, progress to AIDS more slowly. CCR5 is a cell-surface molecule, or receptor, that most HIV variants must use to enter their primary target: the CD4+ T cell. In the trial, CD4+ T-cells were collected from each of 12 HIV-infected volunteers whose virus was controlled by anti-HIV therapy. These cells were then treated in the laboratory with molecular tools called zinc-finger nucleases (ZFNs). The ZFNs were designed to snip the DNA within the gene that codes for the CCR5 receptor. This process introduced a genetic mutation rendering CCR5 receptors non-functional. Subsequently, the cells were stimulated to multiply, and each patient received an infusion of 10 billion of their own CD4+ T-cells, with roughly a fifth of the CCR5 genes now mutated.

Four weeks later, in a planned interruption of anti-HIV therapy, half the study participants stopped taking their antiretroviral drugs for 8 to 12 weeks. Investigators found that the experimental treatment was generally safe, and that the genetically modified cells appeared to be protected from HIV infection. In one volunteer who naturally had the desired mutation in half of his CCR5 genes, HIV replication was controlled during the entire 12-week treatment interruption. Future research will include evaluating this experimental treatment in more volunteers, as well as maximizing the frequency of CCR5 disruption by ZFNs and increasing the persistence of the genetically modified cells in the body to achieve a therapeutic effect.

Said Dr. Anthony Fauci, director of the NIAID, to the NYT:

“It’s a great strategy. It’s exciting, interesting, elegant science. But a lot of ‘ifs’ need to be addressed before you can say ‘Wow, this could really work.’”

The paper adds: "Dr. Fauci also questioned whether patients would want this relatively complex treatment when many people can keep the infection under control with just one to a few pills a day."

When asked what the study tells us about the chance of someone with an undetectable viral load  transmitting HIV, presenter Alison Rodger said: "Our best estimate is it's zero."