After being un-invited as Pasadena City College commencement speaker over the existence of sexually explicit photos on the internet, and then re-invited following public outrage over the slut-shaming, Oscar-winning screenwriter Dustin Lance Black has accepted the school's offer and will speak at the graduation ceremony, the school announced in a press release: 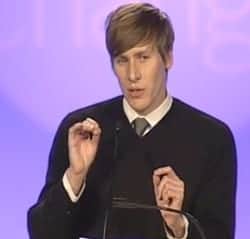 President Rocha spoke with Mr. Black personally over the phone this morning to extend the invitation and to apologize sincerely for the way the college has handled this matter to date.

"It’s time to move forward and put the focus where it should be—on the students,” Mr. Black said. “I look forward to the honor of returning to PCC to support the 2014 graduates of Pasadena City College.”

“All of us at PCC are so proud of Mr. Black and are delighted he is returning to his alma mater," said President Rocha. “Mr. Black’s career represents a rare blend of public leadership, and creativity. Additionally, He has generously committed his attention and resources to fighting for LGBTQ equality, the arts, and—not least of all—education.”