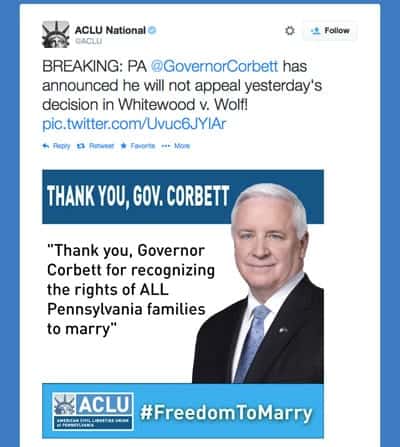 Pennsylvania Governor Corbett says he will NOT appeal yesterday's ruling by a federal judge striking down the state's ban on gay marriage, the ACLU reports.

UPDATE: The ACLU has deleted the above tweet – stay tuned. Perhaps they jumped the gun.

UPDATE: The Washington Blade's Michael Lavers tweets that Corbett's press office told him the governor is "still reviewing" the decision.

UPDATE: The AP is now reporting that Corbett WON'T appeal the ruling.

And here is Corbett's statement:

Statement Regarding the Opinion of Judge Jones in the Whitewood Case

“I have thoroughly reviewed Judge Jones’ opinion in the Whitewood case.  Given the high legal threshold set forth by Judge Jones in this case, the case is extremely unlikely to succeed on appeal.  Therefore, after review of the opinion and on the advice of my Commonwealth legal team, I have decided not to appeal Judge Jones’ decision.

“As a Roman Catholic, the traditional teaching of my faith has not w​​avered. I continue to maintain the belief that marriage is between one man and one woman.  My duties as Governor require that I follow the laws as interpreted by the Courts and make a judgment as to the likelihood of a successful appeal.

"Throughout the debate on this important and meaningful issue, I have maintained that Commonwealth officials and agencies would follow the provisions of Pennsylvania’s marriage law unless or until a court says otherwise.  The court has spoken, and I will ensure that my administration follows the provisions of Judge Jones’ order with respect for all parties.

“It is my hope that as the important issue of same-sex relationships continues to be addressed in our society, that all involved be treated with respect.”