Yesterday we reported that the National Organization for Marriage appealed to the U.S. Supreme Court to stay Judge Michael McShane's ruling striking down Oregon's gay marriage ban while it appeals a decision that prevented it from intervening to defend the ban. 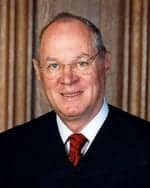 Justice Anthony Kennedy, who is fielding the request, wants more information from the parties involved before he makes a decision.

Kennedy asked for briefs to be filed by 1 p.m. Monday from the parties in the two lawsuits that led to U.S. District Judge Michael McShane's May 19 ruling that allowed gays and lesbians to marry in Oregon.

Kennedy, who hears emergency appeals from the region that includes Oregon, could issue a ruling on NOM's motion on its own or pass the issue on to the full court.

At a minimum, Kennedy's action means that he wants more information on the case before he makes a decision. But it's hard to know whether NOM has a strong shot for its argument that the Supreme Court should get involved in the Oregon case because of its unusual nature.

Previous Post: « GOP Rep. Charlie Dent: ‘Life is Too Short to…Stand in the Way’ of Gay Adults Who Want to Marry
Next Post: Senator Orrin Hatch (R-UT): ‘Gay Marriage is Going to Be the Law of the Land’ »