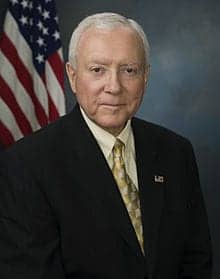 "Let’s face it, anybody who does not believe that gay marriage is going to be the law of the land just hasn’t been observing what’s going on. There is a question whether [the courts] should be able to tell the states what they can or cannot do with something as important as marriage, but the trend right now in the courts is to permit gay marriage and anybody who doesn’t admit that just isn’t living in the real world."

Hatch, who supports a constitutional amendment to ban gay marriage, says he's not surprised by the recent rulings in favor of it:

"How do you blame the judge for deciding a case in accordance with what the Supreme Court has already articulated?"

"Sooner or later gay marriage is probably going to be approved by the Supreme Court of the United States, and certainly as the people in this country move toward it, especially young people. I don't think that's the right way to go, on the other hand, I do accept whatever the courts have to say."