Former GOP governor of Florida and current Democratic gubernatorial candidate Charlie Crist previously apologized for a blatantly anti-gay political track record. Now he has made good on part of his promise to do everything he can to help achieve equal rights for same-sex couples and the LGBTQ community. He filed an amicus brief today in support of same-sex marriage in the Pareto v. Ruvin case set for a July hearing. 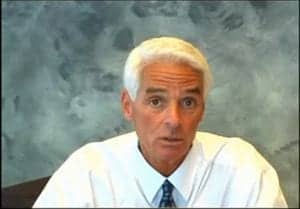 "As former Governor, and as someone who previously supported this measure, Charlie Crist's words matter a great deal,” said Nadine Smith, CEO of Equality Florida. “He has taken the same journey the majority of Floridians have taken in realizing that this ban serves no purpose but to disparage and discriminate against gay couples and our children."

In the brief, Crist stated that as a former Governor and Attorney General who previously supported the ban, he is in a unique position to provide the court a perspective on why it is wrong, harmful to Florida and harmful to gay couples and children who are denied the protections only marriage provides.

In his brief, Crist references his own evolution, in conjunction with the American public's:

“Thus, with the arc of history now, in fact, bending toward justice, this issue of marriage equality will almost certainly not even be an issue for the children and grandchildren of this State. But it is still the duty of those in the present to recognize that the legitimacy of government depends upon its willingness to fairly, transparently, and equitably administer the law. That goal is frustrated by denying an entire class of citizens equality in the institution of marriage simply because of who they are and whom they love.”

Crist's brief is an exciting addition to this case, following others filed by the Orlando and Miami Beach city councils.