Three prominent LGBT organizations and six LGBT members of the New York City Council have endorsed New York State Attorney General Eric Schneiderman (pictured) for reelection. It's no coincidence that these endorsements fall on the one-year anniversary of DOMA's defeat; Schneiderman was an active opponent of the law, so the timing is symbolic. 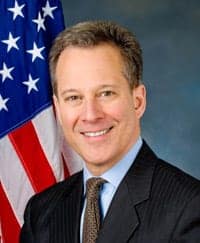 In their statements of endorsement, Councilmembers Jimmy Van Bramer, Rosie Méndez, Daniel Dromm, Corey Johnson, Carlos Menchaca, and Ritchie Torres cite the Attorney General's strong track record of supporting LGBT rights. In addition to fighting DOMA and Prop 8, Schneiderman was a supporter of LGBT rights in the early 2000s, when being a vocal ally was less politically popular.

According to Councilmember Dromm: "Before [Schneiderman] was Attorney General, he worked with our LGBT community to pass SONDA [2002] and DASA [2010] in the State Senate, laws that provide important protections against workplace discrimination and school harassment."

Schneideman is also praised in the statements for his support for immigration reform via the DREAM act, which supports immigrant high school students.

Said Councilmember Menchaca:  "Attorney General Scheiderman has always championed fair treatment for all New Yorkers. That's why the LGBT community and all communities need him fighting by our side, and why I'm proud to endorse him for reelection this November."

Said Schneiderman in response to the support: “I am incredibly grateful for the support of these Council Members and LGBT leaders. They know that our work to ensure equal justice for all New Yorkers is far from over. With their help and support, I look forward to continuing that fight for the next four years.”