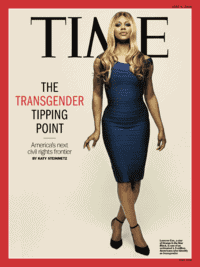 Regardless of the question of whether he has had his genitals amputated, Cox is not a woman, but an effigy of a woman. Sex is a biological reality, and it is not subordinate to subjective impressions, no matter how intense those impressions are, how sincerely they are held, or how painful they make facing the biological facts of life. No hormone injection or surgical mutilation is sufficient to change that.

Genital amputation and mutilation is the extreme expression of the phenomenon, but it is hardly outside the mainstream of contemporary medical practice. The trans self-conception, if the autobiographical literature is any guide, is partly a feeling that one should be living one’s life as a member of the opposite sex and partly a delusion that one is in fact a member of the opposite sex at some level of reality that transcends the biological facts in question. There are many possible therapeutic responses to that condition, but the offer to amputate healthy organs in the service of a delusional tendency is the moral equivalent of meeting a man who believes he is Jesus and inquiring as to whether his insurance plan covers crucifixion.

And here's a petition calling on the Sun-Times to remove it and implement new standards for covering trans people.

UPDATE: The paper has pulled the article.

“Upon further consideration, we concluded the essay did not include some key facts and its overall tone was not consistent with what we seek to publish,” Editorial Editor Tom McNamee told BuzzFeed in a statement. He added that it was the “right thing to do.”

Shortly before the article was pulled, Sun-Times Digital Editor Brandon Wall tweeted, then deleted, that the piece being published was the result of a “colossal parade of f–k ups.”