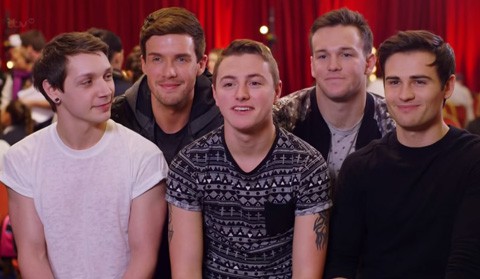 Jamie Lambert (second from left) of Britain's Got Talent winner Collabro has come out of the closet in an interview with Britain's The Sun.

Lambert says he has been out for a while, it's just that the press has never asked about it:

“No one asked — I have nothing to hide from anybody. I think it’s really important that all gay people in the public eye just talk about it. The more that happens, the more normal it becomes…I remember when Stephen Gately from Boyzone came out and it was a really massive deal…But I think nowadays it’s about being comfortable in your own skin and comfortable with who you fall in love with. It doesn’t make a difference whether it’s with a man or a woman…It’s only an aspect of me, just like it’s only an aspect of [his Collabro bandmates] that they’re straight. It’s not all of who I am. I would hate for people to see me as ‘the gay one’, rather than the one who sings that line.”

Towleroad posted a clip back in April when the boyband first made an impression on the BGT judges.