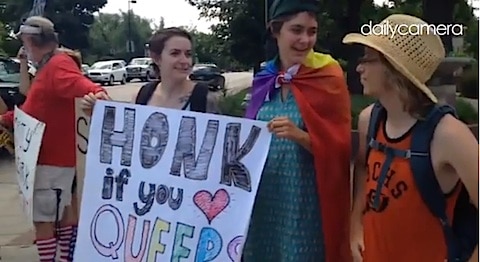 Last Wednesday, Colorado Attorney General John Suthers (pictured) filed a motion in U.S. District Court seeking an injunction against any further litigation seeking to overturn the state's ban on gay marriage while the Tenth Circuit deals with the appeal of their recent ruling holding Utah's gay marriage ban unconstitutional. Suthers move is being seen as a preemptive one seeking to immediately halt marriages if and when Colorado's ban in struck down and prompted by the Boulder County clerk Hillary Hall (below) who has interpreted the Tenth Circuit ruling as justification to begin handing out marriage licenses to gay Coloradans.

Attorney Jean Dubofsky, who successfully argued against the constitutionality of Colorado’s anti-gay Amendment 2 in Romer v. Evans, also put the attorney general’s move Wednesday in the context of the pending state marriage cases, in comments to the Daily Camera.

“It’s like he’s seeking some sort of pretrial relief in the federal case in Denver, and trying to forestall a ruling by the Adams County District Court,” Dubofsky said. “If I were the federal district court judge in Denver, I would say, ‘Wait a minute, this case hasn’t even gone anywhere yet. Why am I being asked to stay everything?’”

Attorney General Suthers' move seeks to halt an ongoing lawsuit of several same-sex couples from Colorado who are suing State Governor John Hickenlooper for the state's denial of their right to marry.

Hill, like some gay rights groups, is pushing the Governor and Attorney General to consider the families whose legal status is in limbo. Said Hill of her actions in a statement last Thursday:

I believe it is a waste of resources for the Attorney General to keep denying people their constitutional right, but that is his prerogative until there is a Supreme Court case squarely addressing the issue. The question now is what public officials like me should do in the meantime. I think the least harmful and most sensible solution is to issue marriage licenses and avoid the potential of more civil rights violations while this plays out in court. I hope the court will agree with me.

Meanwhile, protesters and counter-protesters are battling at a Boulder intersection. The Daily Camera went and spoke with some of them. 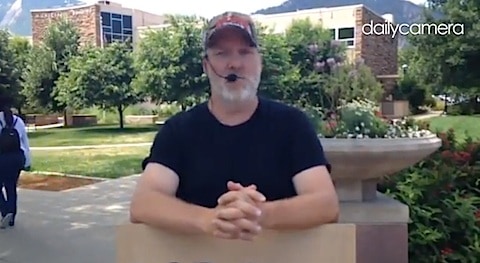