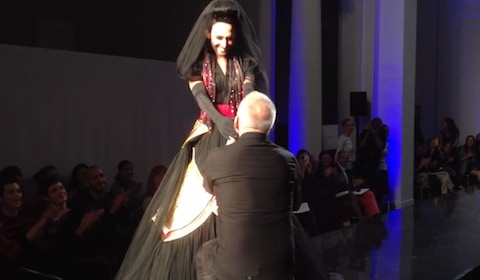 In addition to being the winner of this year’s Eurovision singing contest, Conchita Wurst can now add couture fashion model to her CV after making her debut on the runway for Jean Paul Gaultier. Wurst and Gaultier first met two years ago at another of Gaultier’s shows, the designer told The Independent. Gaultier was instantly struck and inspired by the Austrian drag queen.

“I always say that beauty is difference and Conchita has shown us all that she is unstoppable.” Said Gaultier “[S]he looks great in couture; she is a real couture woman.”

In the past Gaultier has worked other iconoclastic beauties such as singer Beth Ditto, and drag queens Juanita More and Andrej Pejic.