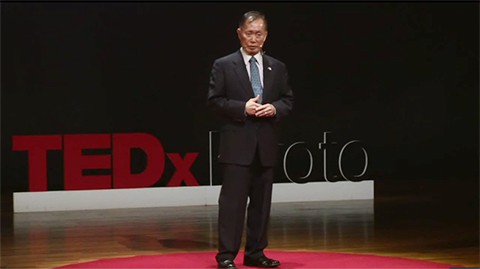 George Takei recently gave a TEDx talk in Kyoto Japan about being sent to an internment camp for Japanese-Americans as a child during World War II and how that experience shaped his perception of democracy and led him to be the outspoken activist and patriot he is today. Takei said his father was his greatest teacher when it came to understanding the contradictions inherent in the American democracy:

For Takei, it was his father along with the decorated Japanese-American servicemen who risked their lives for their country in World War II that left him with a specific legacy and a responsibility:

I am dedicated to making my country an even better America, to making our government an even truer democracy and because of the heroes that I have and the struggles that we've gone through I can stand before you as a gay Japanese American but even more than that I am a proud American.

Watch Takei's talk, AFTER THE JUMP…