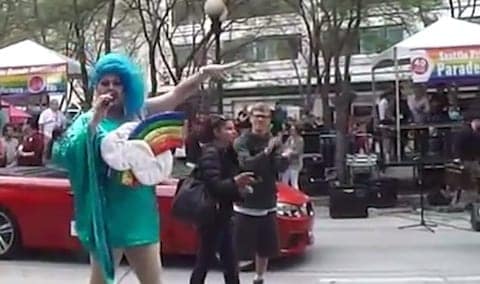 In a fantastic impromptu speech, Mama Tits told anti-gay protesters that they themselves are sinners “because they are wearing cotton polyblend – that is an abomination."

She went on to say:

"Why don’t you read your own book and actually follow the teachings to the letter of god and learn to support and love.  You need to drop the hate. You are a sad, sad excuse for a human being. Once you learn to drop the hate, you too can find happiness because we will welcome you with open arms if you learn to open your minds.  Not today satan, not today!”

Speaking to Seattle Gay Scene after the event, Mama Tits had this to say:

“Before I knew it, I was standing tits to nose with the leader guy on the megaphone. It felt like I had the strength of all the people who had ever been hurt by these people standing right behind be me giving me power! I was almost in autopilot mode from my days as a Sister of Perpetual Indulgence. I planted myself in his path and wouldn’t move. When he walked around me, I got back in front of him again and again. I stared him in the eyes and could see the pain in his eyes, I could see he was scared and he should have been. He tried to hit me with his sign, but like Bianca Del Rio says 'Not Today, Satan!' I pushed his sign away from my face and hair, because you DO NOT TOUCH my hair. And, it was all I could do to NOT get violent, but I didn’t because once that happens, we all lose.”