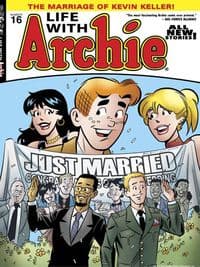 State media censors in Singapore have banned the sale of an 2012 Archie comic book that features the marriage of gay character Kevin Keller – part of the country’s recent crackdown on any publications discussing homosexuality.

Singapore’s Media Development Authority (MDA) censored the comic book, first published in January 2012, earlier this year, but the ban is only just now coming to light — a week after another state agency removed three children’s books promoting tolerance of same-sex relationships from the national library’s shelves. […]

In its guidelines for imported publications, the MDA prohibits comics and other illustrated material that depict or discuss “alternative lifestyles or deviant sexual practices,” listing homosexuality as an example of such (alongside “group sex and sadomasochism”).

In other “Archie” comic news, this week’s conclusion of the “Life with Archie” series found Archie Andrews shot and killed during an assassination attempt on his gay friend Kevin Keller.