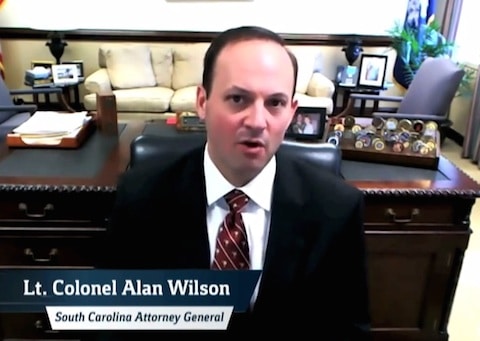 South Carolina Attorney General Alan Wilson has said that he will continue to fight a lawsuit aiming to overturn the state’s ban on same-sex marriage despite a ruling by a federal appeals court, reports The Daily Journal.

Unlike Wilson, yesterday North Carolina Attorney General Roy Cooper announced he would no longer defend the state's ban in court. There are four lawsuits currently challenging it in North Carolina.

Yesterday, the 4th U.S. Circuit Court of Appeals ruled that Virginia's ban on same-sex marriage is unconstitutional. The ruling has jurisdiction over South Carolina which is in the circuit, along with North Carolina and West Virginia.

The lawsuit against South Carolina was filed by a Katherine Bradacs and Tracie Goodwin who were legally married in Washington, D.C., and are now living in South Carolina. The case has been on hold while the appeals court considered the Virginia case.

Mark Powell, a spokesman for Wilson, said he sees no need to change course because the U.S. Supreme Court will likely make the final decision.

"Ultimately, this will be a decision for the U.S. Supreme Court. People should not rush to act or react until that time, when a decision is made by the highest court in the land.”

However, according to Ryan Wilson, executive director of South Carolina Equality, the ruling brings the state one step closer to same-sex marriage and “confirms that gay and lesbian couples are no different from straight couples.”

Last October, Linda Oliver, the mayor of West Union, South Carolina, came under fire for saying that she didn't want "queer" marriages "rammed down her throat."

Watch a Wavy.com report on the striking down of Virginia's ban on same-sex marriage, AFTER THE JUMP…

Previous Post: « Fort Worth Police Video Reaches Out To Gay Recruits: VIDEO
Next Post: The Hobbit: Battle Of The Five Armies Trailer – VIDEO »