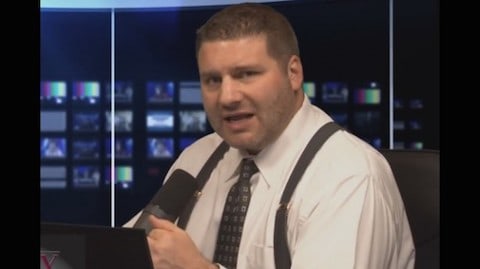 Matt Barber is at it again, using lies to whip up his base into a terrorized frenzy that the gays are here to destroy everything they hold dear. Things are so bad, evidently, that he's prognosticating an impending repeat of the 60's civil rights movement, complete with persecuted Christians engaging in unspecified civil disobedience.

Nevermind that the issues and stances Martin Luther King, Jr.'s civil rights movement held dear – pro labor, pro family planning, anti school prayer – are diametrically opposite to those of Barber and his ilk, Barber still feels like they're the new civil rights movement.

While this would normally be the standard eye-rolling tomfoolery, particularly when he draws the illogical connection of "counterfeit gay marriage" making modern day Christians parallel to Nazi-era Jews, Barber starts taking things in a dangerous direction. He soullessly and opportunistically capitalizes on the brutal torture and murders of Christians in Iraq, Syria, and Sudan to claim the "soft persecution" of Christians in the U.S. is just a "gateway drug" to similar impending violent persecution in the States. And of course no unhinged conspiracy theory is complete without holding Obama responsible in some way; in this case, claiming that Obama is actually aligned with the terrorist group ISIS.

One wonders how long any disobedience on the part of Barber's followers will remain civil when he's trying to convince them that the government will literally hunt them down and kill them, and how fast he will cravenly attempt to absolve himself of any responsibility.