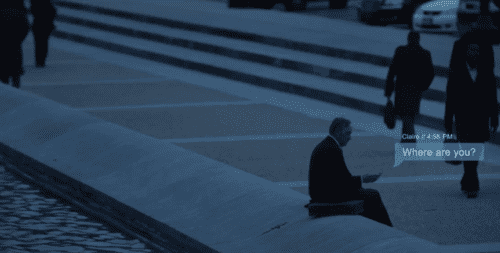 For exploring tropes, there's no better medium than supercut, and Buzzfeed has featured a new one that's particularly thoughtful. YouTube user Every Frame a Painting has uploaded the video in question, which is called "A Brief Look at Texting and the Internet in Film."

Unlike classic, more comprehensive supercuts, this one features a narration. The video walks us through the challenges of including numerous inserts of phones in film, and the new solution that has emerged: on-screen text to indicate messenging. Shows like House of Cards (pictured) and Sherlock have been noticable early adopters, but the YouTube video notes that unexpected, smaller programs like soap operas used the technique first.

The second half of the video questions the bigger, more complex challenges of showing the Internet on film — no larger consensus on this one yet.