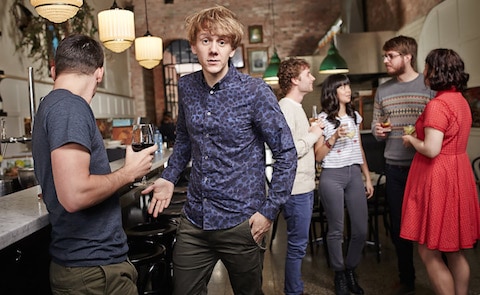 If you haven't already caught an episode of Please Like Me, you may be missing out one of the most charming comedies on television. This gem of a series follows the awkward ups and downs of a young, gay man in Australia as he navigates growing up, coming out and managing his relationships with friends and family. Its second season premieres tonight at 10:30 p.m. on Pivot, and it's already been renewed for a third.

A perfect blend of mundane and absurd, humor and heart, Please Like Me shines thanks to its writer, creator and star, Josh Thomas. We spoke to Josh about the show, his sex scenes and the one idea that was nixed by network executives.

Read what he had to say, AFTER THE JUMP … Towleroad: Congratulations on getting renewed for a third season!

TR: Are you surprised by the show’s popularity?

JT: Yeah, of course. I didn’t really expect anyone to like watch it. Any singular person watching it is like ‘Oh, wow! OK!’ We’re just in our own world making it. Especially in America, because it’s really far away and I’m never there. You talk to people, and they have this connection with this show and it’s cool. It’s always a bit surprising. I did an interview with Israel last week, and I didn’t expect people in Israel to watch the show. But people are watching in Israel, even though they’re at war, which you wouldn’t think would be a priority.

TR: I read that you considered moving the setting of show to America at one point, is that right?

JT: They wanted to do a remake. We even booked a casting agent. But then they decided not to do that thing that Americans like to do sometimes when they remake that overseas show, but a lot worse. Like badly. You know how you guys like to do that sometimes? Instead they just came on board and produced series two and three now.

TR: What has it been like working with network executives?

JT: It’s kind of interesting. It’s my show, but they’re allowed to say no to things. But they never really do. They’re pretty easy-going network executives. It’s a nice creative collaboration, I think. There hasn’t been any times we’ve had to change. OK, there was one thing I had to change that I didn’t want to change, but they were probably right. They were probably being fair enough.

TR: What was the thing they asked you to change?

JT: [Laughs] I saw this drag show in Melbourne once where they had Jesus and Mary in drag, and they didn’t want me to do that. They were like, ‘I don’t think this is necessary. This doesn’t need to happen. There’s no story reason. It’s just going to offend some people, but not for any reason.’ And I was annoyed, but they were right. They were correct. If they weren’t correct, then I would’ve fought them about it for longer. I probably didn’t need to have a drag show with Jesus and Mary in it.

TR: You have your share of love scenes, but you don’t strike me as someone who would be as comfortable with that. Has it been awkward working on these scenes on the show?

JT: [Laughs] I’m fine with it! I’m just pretending to be awkward. The sex? No, I’m not scared of sex. In the show, that was me when I was 20, so the character’s a bit more scared of it, but I’m not. I’m not asexual. Do you think I’m asexual? Is that what you’re saying?

TR: No! I’m just saying I watch, and I’m just thinking I wouldn’t want to be in my underwear on television.

JT: Oh, yeah. Taking my clothes off is my worst nightmare. I just do not like taking my clothes off ever, never, ever, ever. I do not go to the beach. There are a few times in the show we had to, especially as the season goes on, because it was just getting a bit ridiculous excluding all plots where Josh took his shirt off. It was quite hard. That, I hate. Kissing is whatever. The boys are straight, so I’m always the one having to be like, ‘Is this OK?’ 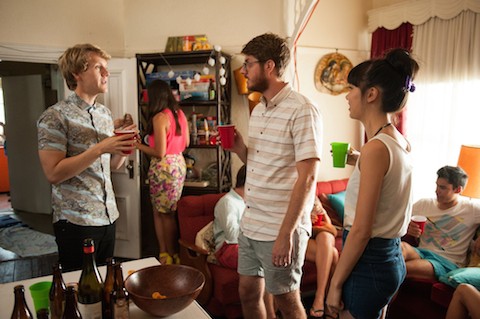 TR: How do you feel about all the comparisons your show gets to HBO’s Girls?

JT: It’s a compliment. Of course, it’s a compliment. It’s a really good show, that people really like, that’s doing really interesting things. If they were comparing me to Two Broke Girls, I’d be offended. But Girls is fine. I just haven’t seen that much of it. The only thing that matters to me is I can’t really watch it now, because it’s made it a really weird experience for me. Now I’m watching it and comparing it to my show. They are very different. They are very different shows. They’re just both made by young people that have a strong aesthetic, a strong set of ideas. I don’t think they are very similar at all. I’m not offended by it. It would be a stupid thing to get offended by.

TR: Another show I hear Please Like Me often referenced alongside is Looking. They both focus on gay characters, so they tend to get lumped together. How do you think Please Like Me contributes to representations of gay people on television?

JT: I don’t know. The character is just based on me, playing me. I just don’t think about how it contributes to representation. It’s a bit weird for me, because I’m just a guy. For me, being gay is really boring. I’m gay every day. I just never really consider how that played out on the media landscape. That was never a question; it still isn’t. It’s not something I think about. It’s something other people sort of think about. I mean, I know how it contributes. The whole thing we did is that it’s just not a big deal on the show. That’s what people really liked, they found that refreshing. That’s just one story, though. There are also times where people come out and it’s a really, really big deal. Kids getting bashed up by their dad for being gay, you know? In our story, it’s just not like that.

TR: What are you most excited for people to see in season two?

JT: I think the new characters. I get weirdly attached to them. I get excited about introducing them to the audience. This show is all about characters, that’s kind of the point. There’s not that much else going on.

TR: One of my favorite scenes from the first season was the car singalong to Steps. I’m wondering if we have more musical segments to look forward to.

JT: Season three, yeah, we’ll just do all Steps all the time.