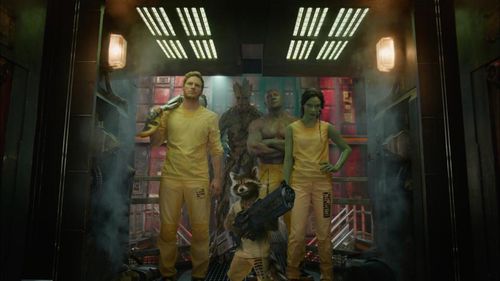 The Marvel Universe movies could have not existed before Right Now. Yet, for all the technological advances and computer wizardry that have made The Avengers possible, the magic still comes from the humanity of the actors. No amount of technical prowess can make you care about Iron Man if a great actor hasn’t sold you on the bravado and change of heart of the man inside the suit. Captain America’s shield and super strength are great but his adventures don’t work if Chris Evans’s star turn isn’t so perfectly pitched to invoke fantasies of the nobility of a bygone American era. (Without the humanity it’s just Transformers and nobody wants that -Shut up. I’m in denial about those billions). With GUARDIANS OF THE GALAXY, Marvel Studios has gone Cosmic opening up a whole new movie wing for their ever-expanding universe. As they leave Earth behind, have they found a way to retain the humanity?

Yes and no. But not in the way you might expect.

It helps of course, on a superficial level that the movie begins on Earth and shamelessly pushes collective 80s nostalgia buttons by making Peter Quill our hero, relentlessly nostalgic about that era. We first meet him as a little boy in 1988 and his most cherished possession twenty some years later when the movie takes place isn’t any of his impressive weapons or starship but a walkman with a cassette tape called “Awesome Mix Tape Volume 1”. It also helps that Peter Quill is played by endearingly simple Andy from “Parks and Recreation” a.k.a. Chris Pratt. 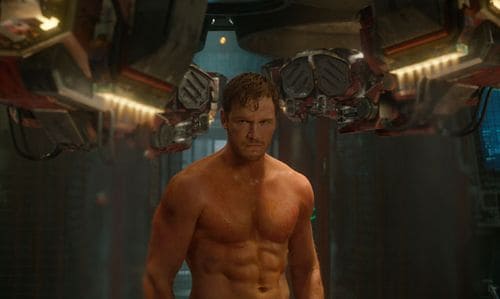 Pratt’s new body may be imposingly hard, with all its cuddly body weight chiseled off, but those years of familiarity have given him a phantom comfy-ness. The actor's comic gift doesn’t exactly give Quill much in the way of character – he’s basically Han Solo lite – but it does give him and the movie a great sense of humor; one joke he makes about a black light is uproariously funny and will thankfully sail right over the heads of the little kids who will enjoy this movie most.

The hero is a ‘type” and each character basically only has one distinguishing trait in both personality and appearance: Drax (Dave Bautista), a red skinned strong man who takes everything literally, Groot (Vin Diesel’s voice), a tree monster who knows only three words “I am Groot.” Rocket (Bradley Cooper’s voice), a genetically engineered raccoon that is a hot tempered genius. They’re broadly sketched but entertaining. 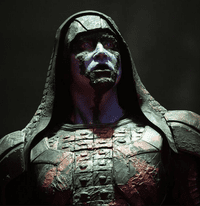 But the true problems lie elsewhere. Humanity is hard to come by in outer space so how to care? The numerous names of planets and races and old un-dramatize politics and feuds start to take on a Green Lantern/Phantom Menace (shudder) messy who-cares incoherence. The less said about the villains the better. Marvel Studios has now made 10 movies and, apart from Loki, they’ve yet to figure out how to do villains properly which is a completely odd deficit given their other strengths and the studio’s comic book origins where many terrific baddies can be found. Beautiful Lee Pace is utterly wasted, buried in makeup and costuming as “Ronan the Accuser” a Kree fanatic constantly bellowing death wishes on an entire civilization. Worse still is Thanos (Josh Brolin), the intended ‘Big Bad’ for whatever adventures The Avengers are getting up to come 2018. He floats on a stupid throne in outer space and the image is utterly weightless, devoid of any context, danger, impact or sense of reality… even in this unreality. And don’t even get me started on the sexism. The Marvel Universe now has two women in it (such numbers for 50% of the population!) and they’re interchangeable: Gamora is a clever beautiful assassin and shady double agent who the hero isn’t sure he can trust. Sound familiar? Yup, she’s The Black Widow. Add green skin, subtract personality. (Scarlett Johansson > Zoe Saldana. You know this to be true… and an understatement.)

But I’m underselling the movie. Director James Gunn and his co-screenwriter Nicole Perlman are at their best when they’re playing with these one-dimensional personalities like they’re tricked up action figures with lots of accessories who tell a joke every time you press a button. The movie is colorful and funny which makes it a buzzy tonic to all the morose self-serious action movies (*cough* Batman). I hope other such movies borrow its love of color but I hope they use it with more self-control and taste. (Guardians doesn’t manage to be as unmistakably tacky as Thor’s Asgard but By Odin’s Beard, it tries. Especially when we visit Xandar and see Glenn Close collecting a paycheck. Yikes.)

Today if you can dream it, you can realize it (with a bankroll), and it's often hard to find restraint that avoids visual clutter and finds a rooting human interest. Which is why it’s something of a mystery, that everything that’s most human and moving about Guardians of the Galaxy is computer generated. Its two most indelibly beautiful and incongruously organic images are fully animated: The first involves thousands of spaceships fusing together to form a protective shield against an alien invader and the image plays slow and golden and begins to resemble a honeycomb with the valiant men as admirable worker bees dying for their essential queen; the second serves exactly the same protective spell purpose but on a far more intimate scale as Groot forms a protective circle around the heroes with his multiple branches. Not one bit of either image is real and yet both are comforting and strangely moving.

Maybe Guardians of the Galaxy shouldn’t work. It laughs at its own jokes harder than the audience and it feels slapped together to get from point A (new wing of Marvel Universe) to point B (Sequels! Future Avengers Integration!). Hell, maybe it doesn’t work. We’ll see in a year when the fog of hype calling each new superhero movie “the best ever” dissipates. But IF it does work, and I’m not here to argue that it isn’t enjoyable, what makes it work isn’t the human element. Instead it’s the conjured humanity of two CG creations and their visually startling devotion to each other. In the end the great takeaway is that gun-toting raccoon and his softhearted tough-barked pet tree. That is a strange sentence to type and these are strange movie times we live in when pixels have more personality than flesh and blood . 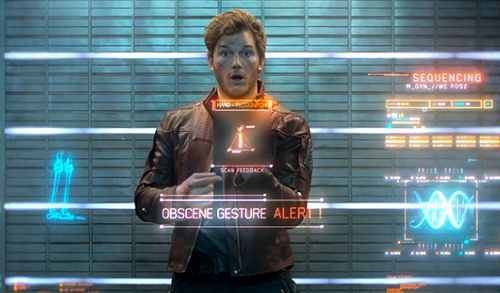 Previous Post: « Gay Iconography: Is Marilyn Monroe One Of the Ultimate Gay Icons?
Next Post: Ben Carson: Same-Sex Marriage Is A ‘Finger-In-Your-Eye To God’ – LISTEN »