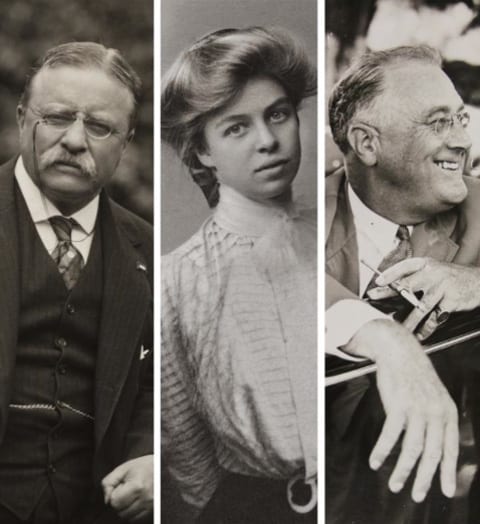 Over at the HuffPost, Michelangelo Signorile enjoyed but takes issue with Ken Burns' negligence regarding key moments of Franklin and Eleanor Roosevelt's lives in his epic, 14-hour PBS documentary series The Roosevelts:

And what about the bisexuality of his right-hand man, Under Secretary of State Sumner Welles?

He was FDR's school chum — and page boy at Eleanor and FDR's wedding — and he was also bisexual and quite sexually active, something about which FDR apparently looked the other way. Eventually, though, Roosevelt reluctantly accepted his resignation in 1937 after one of Welles's rivals in the state department seized upon information that Welles had sex with two black men, Pullman porters on the same train that carried the president from the House Speaker's funeral in Alabama, and threatened to provide the details to a GOP Senate enemy unless Roosevelt dumped him.

And, speaking of bisexuality, Signorile sees a double standard in the treatment of the rumored relationship between Eleanor and her best friend Lorena Hickock, seen by some scholars as definitively passionate, physical, and romantic, but dismissed by Burns as too "tabloid" during a recent discussion of the topic in Chicago:

But the way Burns treats all of this is to discuss Eleanor and Hickok as close and intimate "friends" — he has Doris Kearns Goodwin telling us Hickok was "in love" with Eleanor, almost as if it was one-sided — but never using the "L" word, or even raising the possibility of sex, seeming to view that as sleazy…

…First off, why is it "tabloid" rather than "intimate" to speak of the possibility of a sexual relationship between two women? Burns, after all, had no problem discussing, quite extensively, FDR's sexual affair with Eleanor's secretary Lucy Mercer.

What did you think of The Roosevelts?