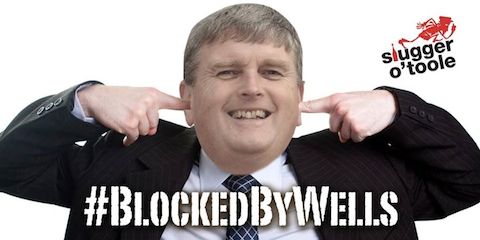 Appointed to the post on Tuesday, Wells replaces Edwin Poots (DUP) who has opposed same-sex marriage and refused to lift the country’s ban on gay men donating blood. Wells has previously said that he finds Pride “repugnant” and has refused to take part in gay rights debates.

“I find the behaviour of those who take part in this march repugnant. I do not wish to be associated in any way with this event. My position on this will not change in the future and I would politely suggest that any further requests of this nature will be a total waste of your time.”

According to Pink News, although their official Twitter account has been blocked, Wells has yet to give them a reason for doing so.

A hashtag #BlockedByWells has sprung up among users targeted by the Minister, including women’s rights activists groups, gay rights advocates and gay Christian group @FaithAndPride.

Edwin Poots was an excellent Health Minister. He has every right to be proud of all that he achieved.