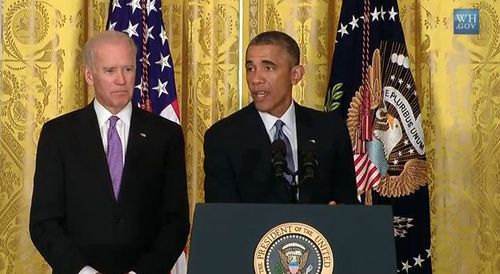 On Friday President Obama and Vice President Joe Biden announced the White House’s “It’s On Us” campaign designed to heighten the public’s awareness of sexual assault. Working in collaboration with Generation Progress, a progressive political non-profit focused on college campuses, It’s On Us is the latest addition to the White House Task Force on Sexual Assault’s broader initiative to standardize the processes through which rape and sexual assault are reported and addressed in college settings.

In April the Task Force published a 20-page reportd detailing steps that university leadership should take to more effectively engage with their students, faculty, and security personnel in the on-going conversation about rape-culture.

“An estimated one in five women has been sexually assaulted during her college years — one in five.” Obama said during Friday’s press conference. “Of those assaults, only 12 percent are reported, and of those reported assaults, only a fraction of the offenders are punished.”

Obama made a point of highlighting the prevalence of sexual assault across multiple demographics, adding that while discussion of rape-culture tends to focus on women, men and members of the LGBT community also deserve the same kinds of protections.

“[W]hile these assaults overwhelmingly happen to women, we know that men are assaulted, too. Men get raped. They’re even less likely to talk about it. We know that sexual assault can happen to anyone, no matter their race, their economic status, sexual orientation, gender identity -– and LGBT victims can feel even more isolated, feel even more alone.”

It’s On Us’s emphasis on bystander prevention and encouraging men to talk about their own experiences marks the White House’s future plans to further expand the Task Force’s focus to K-12 schools, representatives asserted.

“Obviously, many of these habits do not begin as young people arrive on college campus – it begins earlier than that,” explained a senior White House representative. “Today’s announcement is a critical part of the administration’s work to prevent sexual assault, but it is not the final step.”

Watch It's On Us's firist video PSA featuring actors Jon Hamm, Kerry Washington, Rose Byrne and others AFTER THE JUMP…