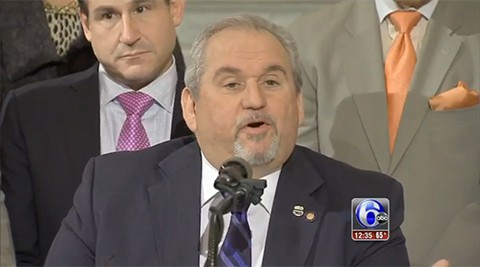 Pennsylvania State Senator Jim Ferlo came out as gay today at a press conference in Harrisburg in which lawmakers called for hate crimes legislation that would protect LGBT citizens in the Quaker State. From ABC 6:

"Hundreds of people know I'm gay. I just never made an official declaration. I never felt I had to wear a billboard on my forehead. But I'm gay. Get over it. I love it. It's a great life," Ferlo said.

The proposed hate crimes legislation was drafted by Ferlo and was created in response to a recent attack on a gay couple in Philadelphia's city center. Out state representative Brian Sims was also present for the press conference to lend his support to Ferlo and the legislation.

Watch a video of Ferlo's announcement, AFTER THE JUMP…