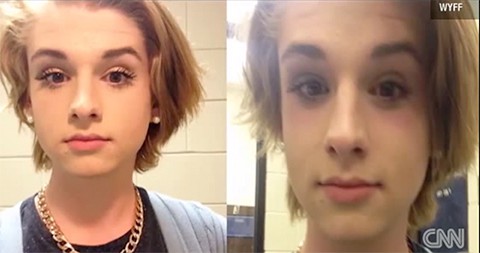 In March, 16 year-old South Carolina resident Chase Culpepper was told by the state's Department of Motor Vehicles to remove the make-up he wears on a daily basis otherwise he would not be allowed to take his driver's license photo. The DMV employees claimed that he did not "look the way a boy should" and was not allowed to wear a "disguise" in his photo as he needed to "look male". Chase removed as much makeup as he he could so he could get his license but reported feeling humiliated after the incident.

In June, the Transgender Legal Defense and Education Fund (TLDEF) stepped in and sent a request to the DMV, asking that Chase be allowed to re-take his photo with the make-up he wears every day. That request went unanswered. Now, the organization has filed a federal suit on Chase's behalf:

The suit – brought by Chase’s mother Teresa Culpepper on his behalf as a minor – asks the court to rule that denying Chase the freedom to wear his everyday makeup in his license photo constitutes sex discrimination and violates his right to free speech and expression under the United States Constitution. It also seeks a ruling under the U.S. and South Carolina Constitutions that the DMV’s photo policy is unconstitutionally vague, too broad, and lets DMV employees arbitrarily decide how a driver's license applicant should look, without regard for the rights of the people they are supposed to serve. […]

“My clothing and makeup reflect who I am,” Chase said.  “The Department of Motor Vehicles should not have forced me to remove my makeup simply because my appearance does not match what they think a boy should look like. I just want the freedom to be who I am without the DMV telling me that I’m somehow not good enough.”

Watch a news report on Chase's trip to the DMV, AFTER THE JUMP…