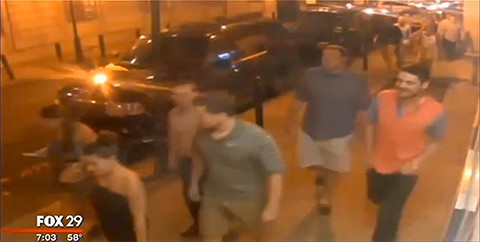 Yesterday, we told you about a brutal hate crime that took place in Philadelphia's City Center. Last night, Philadelphia Police released a surveillance video that appeared to show a group of up to 12 people they identified as suspects in the assault. Shortly thereafter, the video spread like wildfire on social media and resulted in the suspects being identified. Philadelphia Magazine reports: 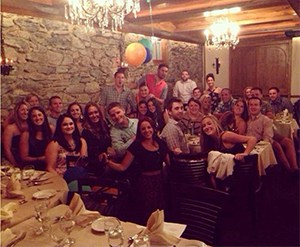 Within hours, former Real Housewives of New Jersey castmate Greg Bennett tweeted this photo [pictured right] that he claims — because of similarities in clothing — includes some of the alleged suspects in the hate crime that happened on Thursday in Center City.

Not long after, police were contacted by lawyers for the suspects. 6ABC reports: "Late Tuesday night, Action News has learned attorneys for some members of the group have called police. They are making arrangements to bring their clients in for questioning on Wednesday."

Twitter user @FanSince09 also played a pivotal role in identifying the suspects. He was able to identify the restaurant shown in the background of the photo tweeted by Bennett and also used Facebook check-ins to help identify the attackers.

No arrests have been made, but Philadelphia police are crediting Twitter and social media users with helping to solve this case.

Philadelphia native and NPR social media guru Melody Kramer documented how the crowdsourced Twitter sleuthing went down using Storify. Check out her excellent timeline along with a news report that shows the surveillance video in question and includes an interview with @FanSince09, AFTER THE JUMP…

Previous Post: « Jinkx Monsoon Serves Up A Side Of Saucy Glamour In Video For ‘The Bacon Shake’: WATCH
Next Post: Muslim Academic Receives Death Threats Over Plans For Gay-Friendly Mosque – VIDEO »