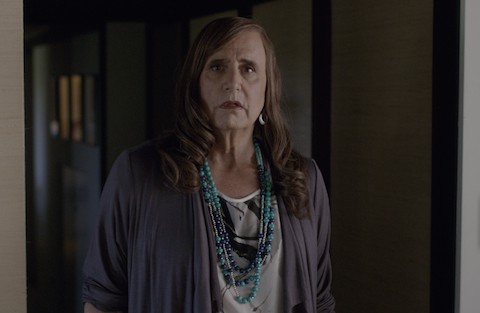 You might want to cancel your weekend plans. Today Amazon releases all ten episodes of their excellent original series, Transparent. Not only is it far and away the strongest offering from the streaming service (and one of the best this television season), it’s also a new high-water mark in telling trans-inclusive stories.

The series follows a Los Angeles family with three adult children as they cope with their father’s coming out as a transgender woman. Forced to re-examine their family dynamics, the sun-soaked dramedy pushes and pulls at all members of the Pfefferman clan, as they struggle to live openly and honestly with one another and within themselves.

Maura Pfeffermen isn’t exactly the sort of role you’d envision for Jeffrey Tambor — the self-described “schlumpy” 70-year-old actor best known for portraying George Bluth on Arrested Development and Hank Kingsley on The Larry Sanders Show – but he is beyond fabulous. Labels like “career-defining” don’t do justice enough to his work here.

“I’m so proud of this show,” the actor told us earlier this month. “This show shines a light on something that needs to be shone and a conversation that has to move forward … That’s important, and that makes me smile when I get up in the morning.”

Find out more about what makes Transparent so special, with thoughts from the creator, cast and more, AFTER THE JUMP …

By placing a trans story in the spotlight, the show has opened itself up to some scrutiny, particularly in the choice to cast a non-trans actor in the lead role. It’s a criticism Tambor anticipated, but one writer and activist Jennifer Finney Boylan (who serves as a consultant on the show) feels will be moot once viewers see Tambor in action.

“If you’re skeptical, watch the pilot,” she assured us. “She will win you over.”

She’s right. Tambor instills so much grace, dignity and just the right amount of trepidation into his character as she begins to live her life not just as a woman, but free from the burdens of the secret she’s been carrying all these years.

“It’s not only about gender, it’s about living your truth,” Finney Boylan said. “I used to say that, for me, going from male to female was not nearly as profound a change as going from someone who had a secret to someone who doesn’t have a secret.”

In a way, that could be said for all the characters on Transparent. For all the bravery and gusto with which the show tackles the trans experience, the other members of the Pfefferman family have their own issues. Eldest daughter Sarah (Amy Landecker) is coping with a marriage gone stale and the reemergence of her former female lover, while Maura’s son, Josh (Jay Duplass), is navigating his relationship with a young musician he’s producing. (Many viewers may feel his story is probably the least compelling of the pilot, but really picks up in the third episode.) There’s also a stand-out performance from Judith Light as Maura’s ex-wife. 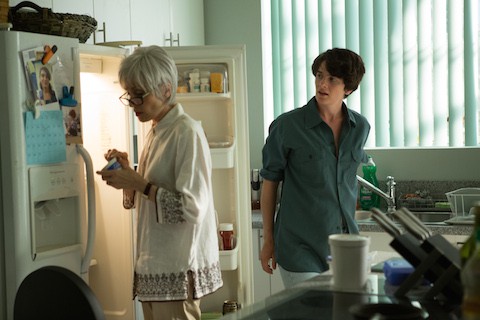 But we’re partial to the performance by Gaby Hoffmann (Girls, Louie). As the baby of the Pfefferman family, Hoffmann’s character Ali is a thirtysomething acting like a twentysomething acting like a teenager. It’s easy to see parallels in her journey of self-discovery with Maura’s (and with Sarah’s and Josh’s, for that matter). Hoffmann perfectly captures that balance of know-it-all and know-nothing naïveté. With a strong bond to Maura and without having yet fully established her own independence, she’s something of a second anchor for the family.

In reality, the actress is getting ready to start her own family with the birth of her first child. She told us her definition of a good parent and how she thinks that’s reflected in the Pfeffermans.

“It’s this probably impossible to achieve balance between being overly intrusive and neglectful, so creating a space in which the child is absolutely loved and held, but given the space to find themselves within that,” she said. “I think that this family has failed up until this point to do that for one another all around; obviously Jeffrey’s character didn’t feel that he had the space to explore himself honestly within the family, and we felt the same.” 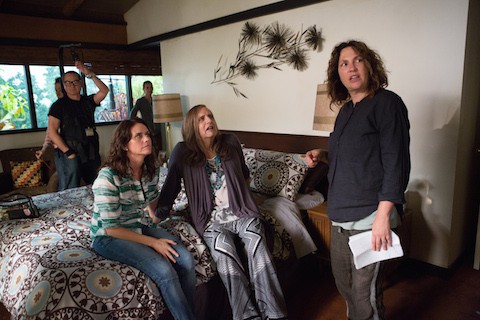 All these strong performances are not merely due to fortuitous casting. Creator Jill Soloway (who has previously worked on Six Feet Under and United States of Tara) brings such a thoughtful (and effective) touch to the work.

“Gosh, it’s so interesting to think about all of the ways I had so much fear about being a director because of what I felt I didn’t know about certain technical things and recognizing that what I bring to directing that is the biggest gift is this maternal, loving, camp-counselor, let’s-have-fun, everybody’s-safe, what-would-happen-if-we-played-as-hard-as-we-could kind of feeling, which feels so effortless to me,” she said. “So it’s kind of amazing that it gave birth to so much amazing work.”

“She’s the first director of note who’s ever said to me, ‘Slow down, slow down, come on guys, let’s find the moments,’” Tambor added. “She loves mistakes, loves serendipity, loves ‘I don’t know’ over ‘I know.’” 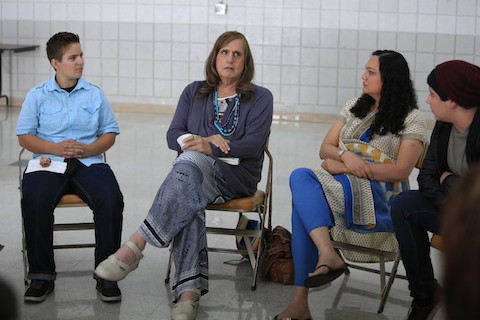 It’s not just her leadership that adds something special to Transparent. Soloway has taken great care to cast a variety of trans actors in speaking roles and to prioritize trans-inclusion on set. The diversity is seen in the faces throughout the episodes of Transparent, but it’s also informed the complexities of the trans experience that underpin the show.

“One of the challenges for non-trans people, for cisgender people, is understanding that trans doesn’t mean any one thing,” Finney Boylan said. “There are so, so many different ways of being trans, and this show does not seek to be the emblematic representation of transgender reality throughout the world.”

Part of the brilliance in Transparent is how the story has positioned Maura’s coming out and transition alongside all the other ways in which her family members are unpacking their identities. The reason why this show will have such an impact is that it consciously (though not overly conspicuously) begs viewers to ask themselves to look at Maura’s journey and see all the ways in which they too have felt isolated because of who they really are. Again, for Soloway, that’s no accident.

“In terms of my style as a writer, as well as a director, the sort of feminine principle is one of allowing. I’m trying to subvert the hero’s journey, subvert the notion that there is one — often white, male, cis — hero and allow the hero mantle to be passed around. When we talk about these characters, we talk about this thing we call the ring of light, which is this lifesaver of light that is about being a Pfefferman, and everybody in the family holds onto it. It allows them to feel ok in this storm of this world where all five of them are otherized. They all feel other. Everybody feels other. Some might say that this is about the children recognizing that they are now able to inherit the legacy of coming from a queer family, but it’s really about coming from a family where otherness is their identifier. And they all share it. By recognizing the way they can share their otherness, it allows them to become their authentic selves. The secret moves away. The secret functioned as a boundary. Now that the secret is gone, these five people need to find their new boundaries which are about a feeling of loving and being loved unconditionally.”

If nothing else, the family dynamics will feel familiar.

“[Your family] are the people that know you best and you know best and you trust and love, and yet they can make you feel lonelier than anybody,” Hoffmann said. “That incredible desire for being one’s self and finding oneself in this space that is supposed to feel safest … but for some reason you step into and become powerless to the overwhelming force of this dynamic; I think that everybody can relate to that.”

All episodes of Transparent’s first season are available today to Amazon Prime subscribers. Watch the pilot for free here.