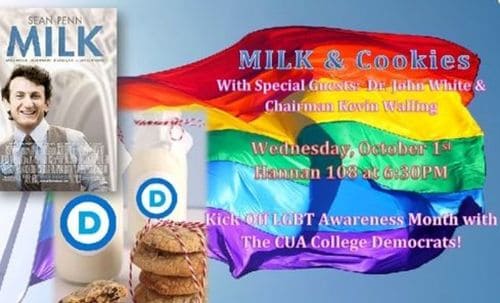 A chapter of the College Democrats at Catholic University was told to postpone a screening of the Gus van Sant film 'Milk' about gay rights pioneer Harvey Milk after it saw that fliers advertising the event tied it to LGBT Awareness Month, the Washington Post reports:

“For university administrators, it called into question whether the event had changed in nature from one of education to one of advocacy,” Nakas said in a statement. “Given the confusion caused by the advertising, the Office of the Dean of Students contacted the College Democrats to postpone the event.”

Nakas added: “The Director of Campus Activities is working with the College Democrats to review the program request to ensure that the program is presented as an educational event, as originally planned. It is our expectation that it will be rescheduled for later in October.”

The group is expected to rebill the program as an educational event and reschedule it for later in October.