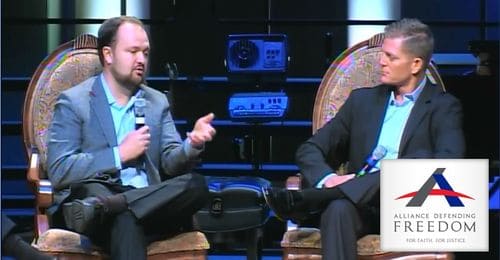 ADF was recently profiled by Human Rights Campaign for its attempts to criminalize homosexuality abroad, most recently in Slovakia and is currently litigating on behalf of a wedding venue in Coeur d’Alene, Idaho, that refused to perform a same-sex marriage.

On October 16th, Douthat spoke at the ADF event that aimed to draw attention to a number of popular right-wing horror stories about the threat LGBT equality poses to religious liberty. Douthat spoke alongside the homophobic Benham brothers who recently compared themselves to the victims of ISIS' beheadings because their reality TV show was cancelled due to their extremist statements and views.

@DouthatNYT @nytimes Why do you spend time with people & organizations who believe that I should be jailed for being gay? U can do better…

Apologizing, Douthat said that he did not know ADF's event was a fundraiser and plans to decline the honorarium he received from the event.

"I was not aware in advance that this event was a fundraiser and had I known, I would not have agreed to participate. I was invited by an events organizing group, not by ADF directly. I understood this to be a public conversation about religious liberty. This is my fault for not doing my due diligence, and I will be declining the honorarium."

Richard Rosendall, president of the Gay and Lesbian Activists Alliance of Washington, D.C., said that Douthat’s decision to take part in the ADF event is disturbing because of the group’s extreme activism and relentless “attacks on equal protection of gay people and families.”  Rosendall added that Douthat’s participation “says unfortunate things about” the journalist.

Watch a video from the event where David Benham discusses the "sexual anarchy agenda," AFTER THE JUMP…