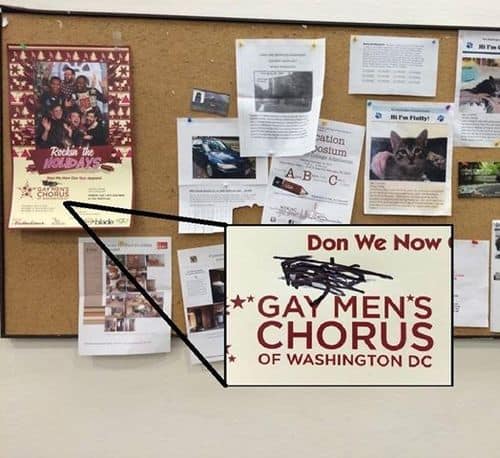 A Gay Men’s Chorus of Washington poster was vandalized this week in the Longworth House Office Building Cafeteria on Capitol Hill – the first incident of its kind in recent memory according to Executive Director Chase Maggiano.

The poster, which advertises the group’s upcoming Holiday Concert, was vandalized with the word “Fag’s” in marker. Someone attempted to cross it out, but the slur is still visible.

In an email to Towleroad, GMCW Director of Marketing Craig Cipollini wrote that the poster is still up, with a replacement coming later this week. Police were not contacted, but a Chorus member who works on the Hill notified the CAO [Chief Administrative Office].

“Sometimes we hear stories of bullying and vandalism at the area high schools we visit, but it’s pretty surprising to see this happen on Capitol Hill. This tells us that we still have equality work to do right in our own backyard.”