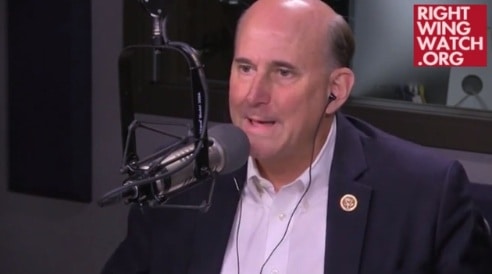 Republican Rep. Louie Gohmert of Texas, who has found ways to oppose gun control because…same-sex marriage (?), was quite vocal recently about Don't Ask, Don't Tell. Of course he opposed the repeal of the discriminatory policy, but who knew his reasoning could be this far-fetched.

When the ancient Greeks and man-on-man massages play into your law-making, you can't exactly claim you "know your history," as Gohmert does.

"I've had people say, 'Hey, you know, there's nothing wrong with gays in the military. Look at the Greeks,'" he said. "Well, you know, they did have people come along who they loved that was the same sex and would give them massages before they went into battle. But you know what, it's a different kind of fighting, it's a different kind of war and if you're sitting around getting massages all day ready to go into a big, planned battle, then you're not going to last very long. It's guerrilla fighting. You are going to be ultimately vulnerable to terrorism and if that's what you start doing in the military like the Greeks did … as people have said, 'Louie, you have got to understand, you don't even know your history.' Oh yes I do. I know exactly. It's not a good idea."

Right, because gay servicemembers, given the chance to enter combat, will resort to the ancient Greek philosophy: massages before fighting, what could go wrong?

Someone please keep history from repeating itself and do not reelect Gohmert.

Watch the historical crash-and-burn, AFTER THE JUMP…