Never one to keep his mouth shut while LGBT equality steamrolls ahead of him, Texas Senator Ted Cruz released a statement this afternoon blasting the Supreme Court's refusal to review the seven gay marriage cases before it. 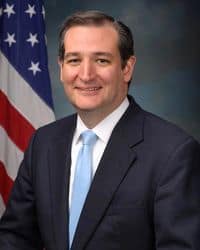 This is judicial activism at its worst. The Constitution entrusts state legislatures, elected by the People, to define marriage consistent with the values and mores of their citizens.  Unelected judges should not be imposing their policy preferences to subvert the considered judgments of democratically elected legislatures. […]

It is beyond dispute that when the 14th Amendment was adopted 146 years ago, as a necessary post-Civil War era reform, it was not imagined to also mandate same-sex marriage, but that is what the Supreme Court is implying today. The Court is making the preposterous assumption that the People of the United States somehow silently redefined marriage in 1868 when they ratified the 14th Amendment. […]

Marriage is a question for the States.  That is why I have introduced legislation, S. 2024, to protect the authority of state legislatures to define marriage. And that is why, when Congress returns to session, I will be introducing a constitutional amendment to prevent the federal government or the courts from attacking or striking down state marriage laws.

Traditional marriage is an institution whose integrity and vitality are critical to the health of any society. We should remain faithful to our moral heritage and never hesitate to defend it.

Cruz and Utah Senator Mike Lee appear to be the only two congressional Republicans to respond to today's historic news.

Previous Post: « Mormon Church Responds to SCOTUS Decision: ‘Only Marriage Between A Man and a Woman Is Acceptable to God’
Next Post: What To Watch This Week on TV: Nick Jonas Brawls, ‘Freak Show’ Comes To Town »