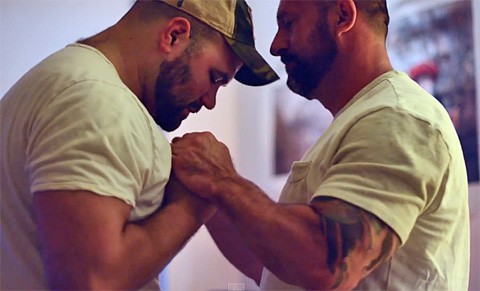 Jazz musician and Boston-based composer Mike Flanagan, aka MRF, has a new video premiering this weekend for his breakup song "Trying," off his iTunes album Mob Music. Telling the story of bear romance gone wrong, the beautifully shot clip may be a little on the sad side but the muscle bear couple (one half of which is Flanagan himself) more than make up for the melancholy.

While bears tend to appear online in either extremely comic situations (like the web series Where The Bears Are and the Bear City rom coms) or seriously sexual ones, it's nice for change to see them portrayed with a bit of reality and a touch of romance too.