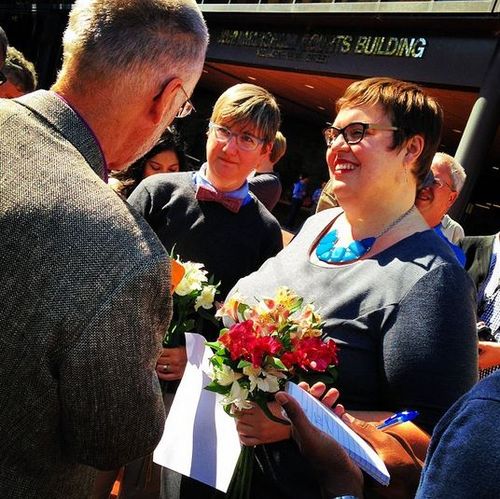 Huge day for equality as gay couples in Utah, Virginia, Oklahoma, Indiana, and Wisconsin have finally secured the freedom to marry after the Supreme Court refused to review seven gay marriage cases before it this morning.

The court’s decision has also paved the way for marriage equality to begin in Colorado, Kansas, West Virginia, South Carolina, North Carolina, and Wyoming in the near future.

Tons of footage and pictures are streaming in from couples who are taking part in this historic day. Check out our rolling coverage AFTER THE JUMP…(warning: autoplay)

Officially tying the knot in the sunshine pic.twitter.com/ZgxFNLhBYM

Mary Bishop and Saron Baldwin, who filed their case over a decade ago

Mary Bishop and Sharon Baldwin are filling out their license now and plan to marry at the courthouse today. pic.twitter.com/QZOwKNGLQn

Previous Post: « Gay in Aceh, Indonesia? Brace for 100 Lashes in Front of a Jeering Crowd
Next Post: Triumph The Insult Dog Vs. Times Square Mascots: VIDEO »