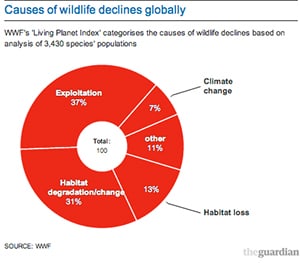 A new report from the World Wildlife Fund (WWF) and the Zoological Society of London has found the number of wild animals on Earth has reduced by half over the last 40 years, according to The Guardian. The decrease comes as a result of the negative impact humans have had on ecosystems across the globe. Wildlife have been hunted and killed for food by humans at an unsustainable rate and have also had their habitats destroyed or polluted:

The steep decline of animal, fish and bird numbers was calculated by analysing 10,000 different populations, covering 3,000 species in total. This data was then, for the first time, used to create a representative “Living Planet Index” (LPI), reflecting the state of all 45,000 known vertebrates. […]

The fastest decline among the animal populations were found in freshwater ecosystems, where numbers have plummeted by 75% since 1970. “Rivers are the bottom of the system,” said Dave Tickner, WWF’s chief freshwater adviser. “Whatever happens on the land, it all ends up in the rivers.” For example, he said, tens of billions of tonnes of effluent are dumped in the Ganges in India every year.