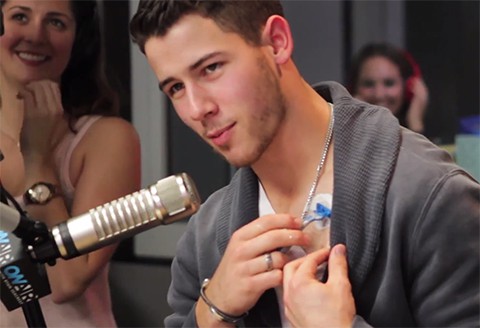 Nick Jonas dropped by "On Air with Ryan Seacrest" this morning and found himself getting more than he bargained for. His much talked about crotch was commandeered for a game of "Crotch Ball" that had a distinctive air of truth or dare to it. As Gossip Cop notes: "The rules were simple. Seacrest attempted to throw a ball through a hoop that was attached to Jonas’ waist (above his crotch). If he missed, the “Jealous” singer had to perform a dare."

Jonas was quite adept at moving his crotch as needed. However, no doubt trying to force a dare, Seacrest threw a wild shot that Jonas' crotch couldn't handle. The result? He had to shave his chest. Well, a part of it at least. As Jonas prepared to shave a swatch of his naturally hairy chest, Seacrest turned the conversation to Jonas' hair down there:

“Do you manscape anything else? You manscape.” Jonas responded coyly, “Sometimes. I don’t do everything.” Seacrest exclaimed, “Nick Jonas shaving his chest. This is something I just dream about.”

Watch Jonas work his crotch around Seacrest's ball, AFTER THE JUMP… 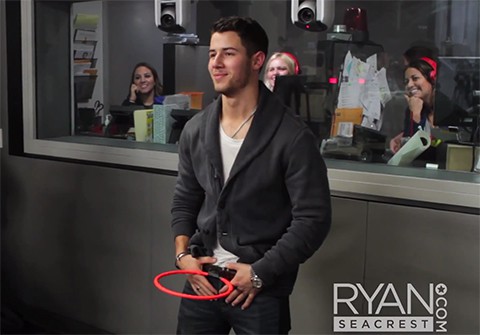 Previous Post: « One Direction’s Louis Tomlinson Blasts Reporter for Implying He’s Gay: ‘I Am In Fact Straight’
Next Post: Robyn Asks ‘Who Do You Love’ in New Video from Kindness: WATCH »